I wanted to make Bo a cat bed to replace the old towel he liked to sleep on. Bo had input in the fabric selection. I put down a couple of options and he immediately sat down on the Amy Butler wallflower fabric. Apparently I'm not the only Amy Butler fan in the house. (Actually, I think that one just happened to be in the sunniest spot in the room but I prefer the other conclusion.) 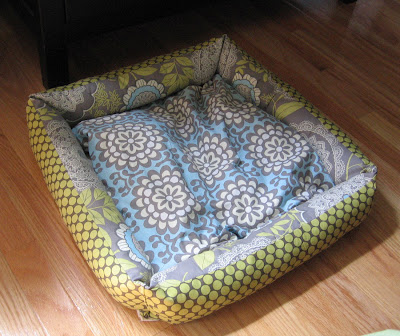 I originally just made the pillow on the inside with no walls. I should have known that he wouldn't like it. I even tried stuffing it with catnip but he still wouldn't sit on it. Peter made the suggestion that I add walls to the pillow. He loves sitting in boxes, even if they're too small for him. So back to the drawing board I went. I had an idea, but I wasn't sure I could make it work. 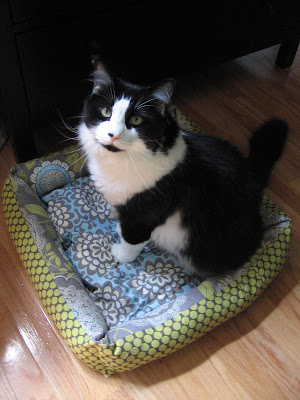 Luckily it worked. And he likes it. I didn't even have to tempt him with catnip. 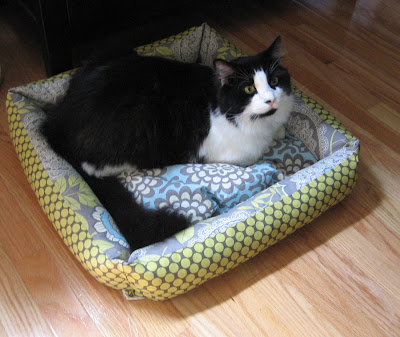 It was really simple to put together. This would be great for small dogs too. Anyone care for a tutorial?
Posted by Stephanie at 10:24 PM

Adorable. How did you make the sides stand up so nice?

What a great idea! And yes please for a turorial.

oo, definitely would love a tutorial. that is adorable, and your kitty looks so happy in it!

me me me..(putting hands up in the air) a tuturial would be awesome. It looks awesome..great to see a pets getting stylish accessories too!

This must be the most stylish cat bed ever made.
I haven't got a cat or dog but would love a tutorial if I did.
Loved the patchwork inspiration from your previous post.
maria.

Two Dogs and a Quilt said...

Very impressive. I love the fabrics together.

How lovely! A tutorial would be great, thanks!

If only we had a pet! It is wonderful.

I'd love a tutorial. I have a big cat AND a toy poodle, so this would be perfect!

Moi! I've got a little stinkball of fur living with us who believes his rightful place is on the couch with us, sandwiched inbetween two sets of legs. This has got to stop! lol

I love this. Bo is so cute. I would love a tutorial. I have the perfect fabric for my cat Smokey.
My cat loves boxes too!

Your cat bed is so cute! I love it! And your cat is totally adorable too!

Your kitty loving his new designer bed is so dear! Amy would think this is grand—she has 3 cats.

I would love to learn how to make this pattern too, thanks!

I would have picked the same fabric if I were a cat too. Very nice! What a sweet cat.

I'd love a tutorial - this came out so cute! Your cat is flippin' adorable as well :)

What a handsome guy. One of my kitties love boxes too.

A tutorial would be appreciated!

Oh! My kitties would love one of these, a tutorial would be great.

What a great idea! And yes please we would like to have the turorial for our two cats.

A tutorial would be great. Or you could make a pattern/pdf pattern and sell it in your etsy store. :-)

My dog would love a bed like this, but I couldn't bear to use my Amy Butler stash for it, lol!

Very cute...I could see my Figgy or Jo sleeping in that! Mary

What a great bed.

My dogs have eaten every bed they've had so far, though. They wouldn't get Amy Butler fabric, that's for sure...

Bo is a truly pampered pussy cat with his Amy Butler bed! Love it!

My cat read this post and forwarded it to me at work. She loves to get on my laptop when I'm not there. So yes, a tutorial would be a wonderful thing. I can't let poor P-Titters sleep on the floor anymore!

The cat bed is beautiful! If only I had a cat...